The neck is attached to the body with a tapered sliding dovetail joint. This is the traditional joint for neck attachment. There have been a number of different approaches introduced in recent years, including bolted and pinned straight tenons, and even flat butt joints attached with epoxy. While these are easier to cut than the tapered sliding dovetail, and the bolted necks are easier to repair when a neck reset is needed (the epoxy-glued necks are virtually impossible to remove), the dovetail is a strong, self-locking joint that’s not that difficult to cut or adjust.

The tenon part of the joint is cut on the end of the neck stock, which was made an extra 1/2″ longer for this purpose. The mortise of the joint is cut into the end of the guitar body, which has a substantial neck block to accept the mortise. What makes the cutting of the joint particularly challenging is the fact that the surfaces involved don’t meet at right angles. Because the top of the guitar is arched, the top of the guitar and the sides form an angle that’s greater than 90 degrees. In fact, the top isn’t even planar, being a portion of a sphere, and the sides are themselves curved. To allow the fretboard to lie flat on the top, a small flat is planed on the top where the fretboard will lie. (Recall that a similar small flat was planed on the sides at the top of the body, before the binding was applied, to facilitate the cutting and fitting of the neck joint.)

For the top of the neck to be flush with and aligned with this flat, it is necessary for the end of the neck to be cut to the complementary angle to that made by the guitar top and the sides. The angle isn’t measured in degrees, but rather transferred with a marking gauge. The gauge is held against the guitar body, and tightened at the correct angle; though the angle in the photograph looks like a right angle, it’s not. Notice that the blade of the gauge is roughly in the middle, forming a “tee”. The leg that’s off of the body has the complementary angle, and will be used to mark the angle on the neck.

Even though the scribe mark looks as if it’s just a right-angle cutoff of the neck stock end, it’s not.

The neck can now be cut off at the mark. I use a bandsaw, and then plane the cutoff end flush with the marks. A very sharp plane is helpful for planing the end grain.

The dimensions used for the dovetail are shown in the following diagram. 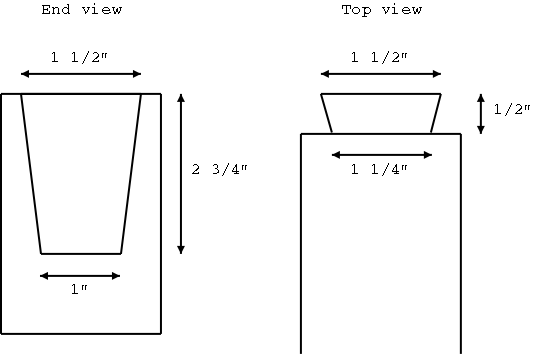 The dovetail can now be marked on the end of the neck blank. Note that the length of the tenon is scribed 1/2″ in from the end using a marking gauge. 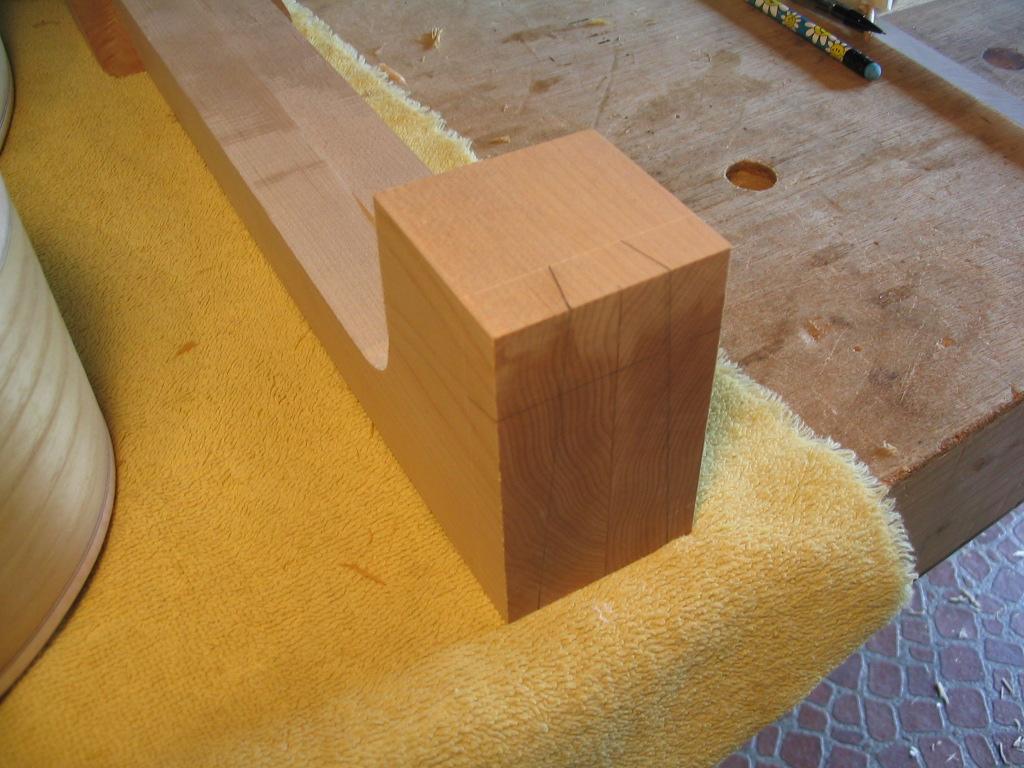 The dovetail joint is then cut, using either a dovetail saw or a fine backsaw. I don’t try to cut right to the line, expecting to finish the joint by paring with a sharp chisel after sawing. The two long angled cuts, which form the “cheeks” of the dovetail, are cut first. Notice how the neck is angled in the clamp so the sawcut will be on the vertical; I find this helps in keeping the cut straight, being easier than trying to angle the sawblade.

The bottom of the dovetail is cut next. Note that these three cuts have been rip cuts – the saw is cutting with the grain, rather than across it.

The “shoulders” of the dovetail are cut next – these are crosscuts, going across the grain.

Finally, the small remaining chunk at the bottom is cut off.

The dovetail is then cleaned up with a very sharp chisel. The surfaces are all smoothed, with particular attention paid to getting the shoulders to be planar – that is, the flat area that the tenon rises out of should truly be flat. This can be achieved using a straightedge to find any high spots. The angles on the dovetail can also be checked with a small gauge. When completely cleaned up (which can take a while), the dovetail should look like that below. Note that the sharp edges of the tenon itself have been beveled to keep them from binding in the mortise corners.

The mortise to receive the tenon can now be cut in the body. The joint is first marked on the body (the line delineating the bottom of the joint is missing in the photo).

The “cheeks” of the mortise are now cut with a backsaw or dovetail saw. Note that only half the surface of the cheek can be cut, since the joint is actually “half blind”.

The bulk of the mortise can now be wasted away using a large-diameter drill bit in a drill press. A piece of stock is clamped on the top of the body to keep the bit from breaking out. The depth of the holes should be about 1/2″ plus 1/16″. The mortise will be deeper than the tenon is long, so there will be some space at the bottom of the mortise. The bottom mortise surface isn’t important in the strength of the joint – in fact, if it’s not deep enough, this surface will actually interfere with the fitting of the joint. Plus, leaving some space makes the joint a little easier to take apart if this is needed in the future to remove the neck for a neck reset or other repair: the gap lets steam used to soften the glue penetrate deep into the joint.

The remainder of the mortise is now chiseled out. With the body clamped as shown, the neck block absorbs the impact of the mallet when chopping the mortise (though it’s important to not be too heavy-handed as the guitar body is overall somewhat fragile). Again, the depth of the back face of the mortise (with the little divots left by the drill bit) isn’t critical, as long as it’s deep enough for the face of the tenon to clear it. The angled sides of the mortise are important, though, and should be trimmed carefully. The bottom face is also not critical, but again needs to be deep enough so the tenon can seat in the mortise.

When finished chopping, the mortise should match the tenon.

The tenon can now be fit into the mortise. If the tenon is left a little large (or the mortise small), the tenon (or mortise) will need to be shaved a bit to get the top of the neck to be flush with the flat on the top of the body. This also permits alignment of the neck: a straightedge laid along the neck’s centerline should run along the centerline of the body. The neck alignment can be adjusted by taking a little more off of one shoulder of the tenon. In addition, the fit of the joint should be tested as the mortise and tenon are shaved. If the joint is tight at the top but loose at the bottom, the tenon is a little too wide at the top, and a little should be shaved from the upper portion of the tenon cheeks to rectify this.

Sometimes the tenon needs to be shaved so much to get the proper fit and alignment that the top surface of the neck falls below the surface of the body. This is easily remedied using shims, that can be cut from a sheet of veneer. For very fine adjustment, I’ve even used thick plane shavings.

When finished, the joint should fit tightly all along the line where the neck dovetail’s shoulders contact the sides of the body.

The neck can now be marked to be cut for the heel cap.

The heel cap can be glued so it’s at a right angle to the sides, but I prefer to  angle it back so it matches the angle of the back. The appropriate angle can be obtained with the marking gauge in the same way that the angle was transferred from the top to the neck.

The complementary angle is transferred to the neck stock, and the stock is cut and planed flat.

The heel cap is then glued onto the planed flat. I like to include layers of veneer to match the purfling on the binding on the body.

When the glue is dry, the heel cap is pared to be flush with the shoulders of the dovetail.

Finally, the fit of the neck is checked.

At this point, the neck can be carved to shape.