The braced back is next joined to the top-sides assembly. The sides must first be shaped to have the correct edge profile to meet the arched back, just as the edges of the sides had to be shaped to join up with the arched top. The process of marking and shaping the sides is largely the same as the process used for the top edge, except that the arched workboard for the back is used instead of the workboard for the top since the archings of the top and back are different, and the correct side heights need to be met at the end and neck blocks. The depth of the sides in the finished guitar is usually different at the neck and tail ends, being generally deeper at the tail. I typically use around 3 1/2″ for the side depth at the neck, and from 4″ to 4 1/2″ at the tail.

The first step involves marking the side heights at the neck and end blocks so the completed body will have the desired thicknesses at these points. In the next two photos, you can see pencil lines indicating what the finished body thickness is to be at the head and tail of the guitar. Below the body thickness is marked at the head of the body (where the neck will attach), in this case 3 1/2″.

In the photo below the line marks the side height at the tail of the guitar – in this case, 4″.

When the assembly has been shimmed so the two pencil marks are the same height above the workboard, a drawing gauge is made, consisting of a thin piece of stock with a 1/16″ hole drilled at exactly this height from the end, as shown below. This will be used to mark the sides to have the profile needed to join with the arched back, exactly as was done for the side-top joint. You can see in the photo below this gauge with a pencil in the hole. The gauge will be slid on the workboard around the perimeter of the guitar; since the workboard has the same arch as the back, the line traced will be gently undulating to match this arch.

Below you can see the line traced using the gauge, with the gauge in position (but without the pencil). Note that it’s important to keep the top-side assembly from shifting on the arched workboard as the guage is used to draw the line. 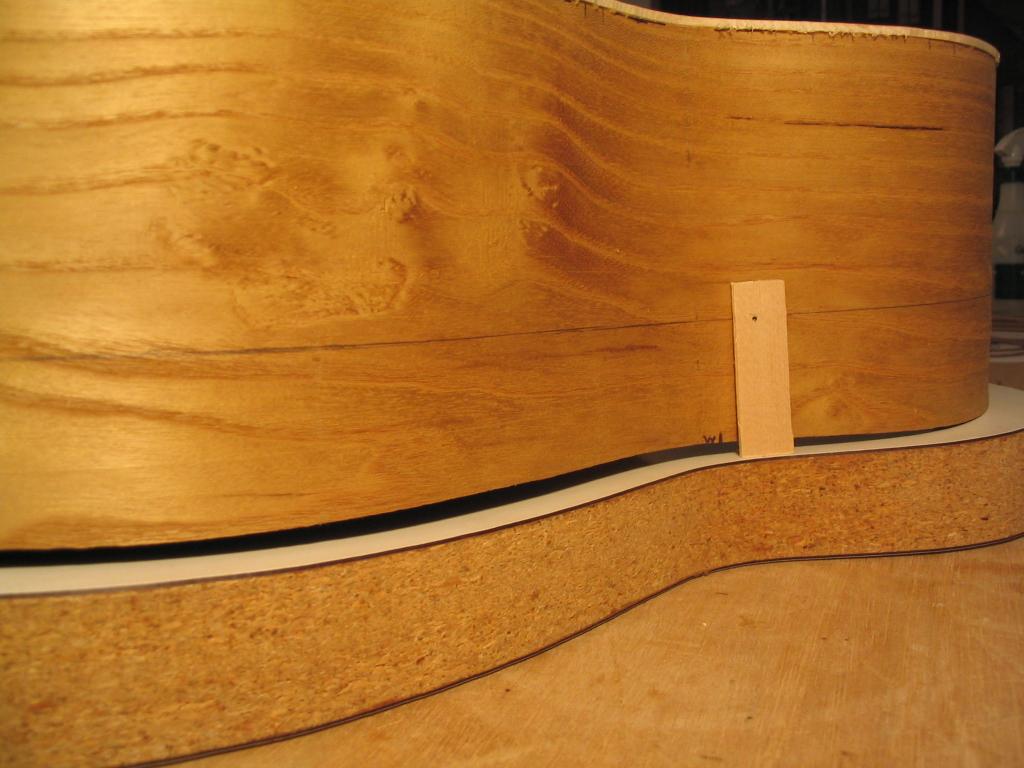 The line traces the entire periphery of the top-side assembly. 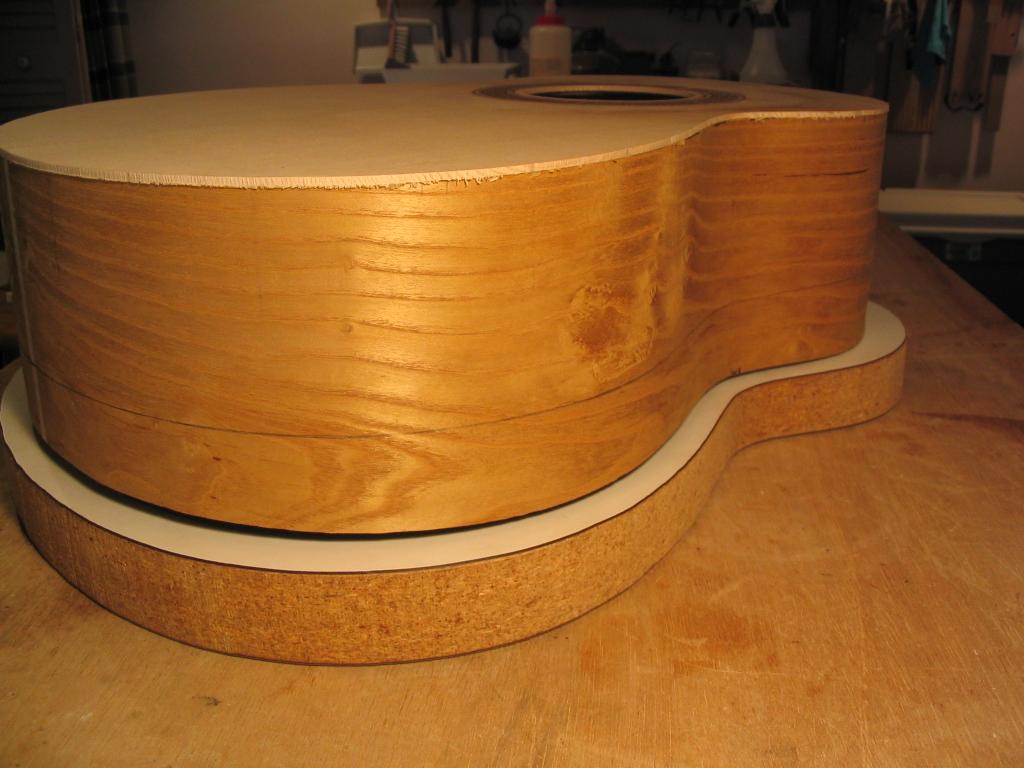 With the back-side profile traced, the sides can now be cut down to this profile. Since there’s a lot of material to remove, I generally start with a drawknife, as shown below. The top-side assembly is placed into the gluing form to hold it during this operation. (If this doesn’t hold the assembly securely enough, a waist brace can be put in to “clamp” the sides in the jig.)

You need to watch the grain while using the drawknife, as it’s easy to split off a bigger chunk than you intended… 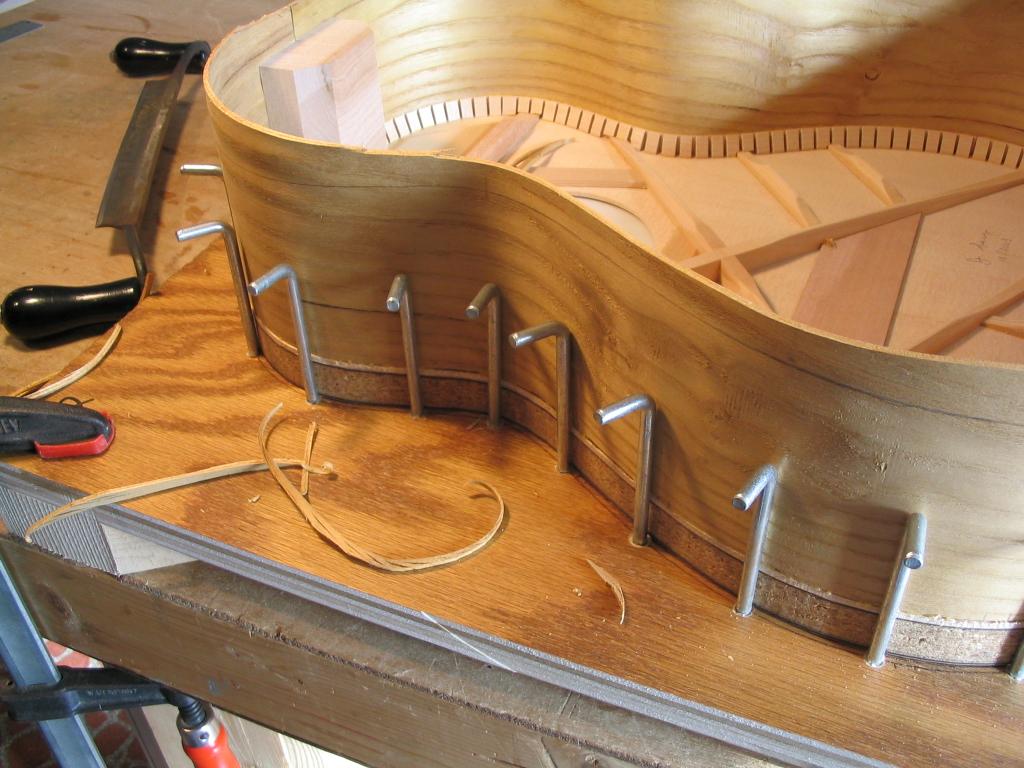 In the photo below, the sides have been cut down to within about 1/4″ of the scribed line, except at the neck and end blocks. Since the end block protrudes significantly, it will be cut with a saw before shaping proceeds with a spokeshave. 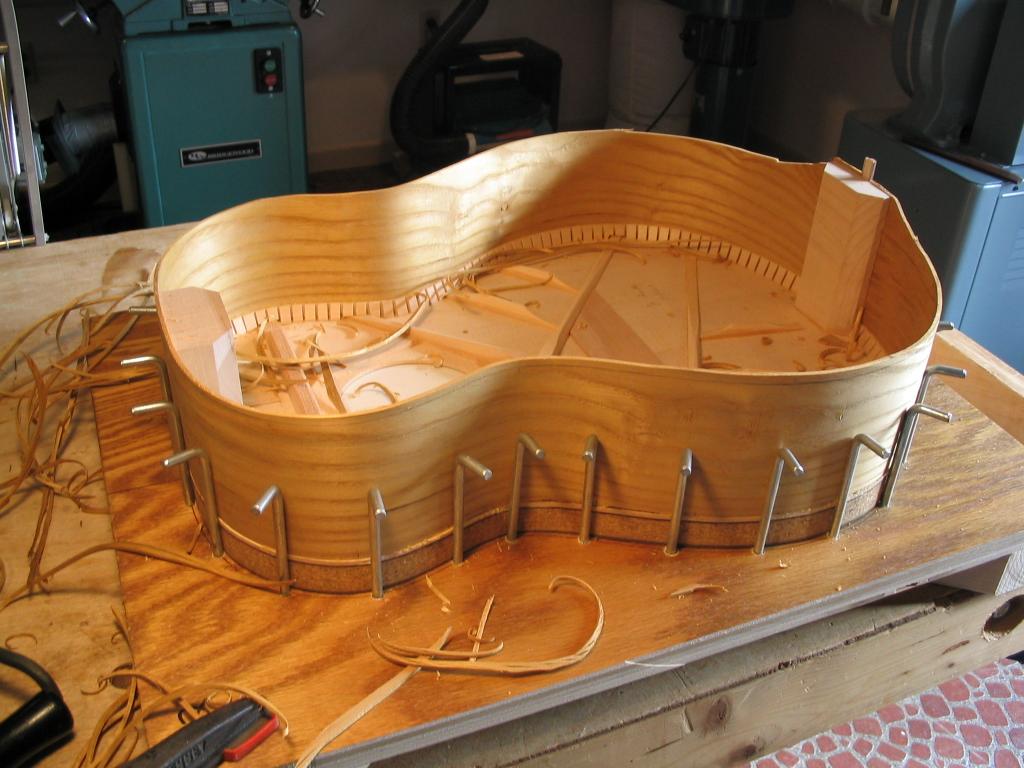 The tail block is rough-sawn with a bowsaw. Note the clamp to help secure the assembly during this operation. 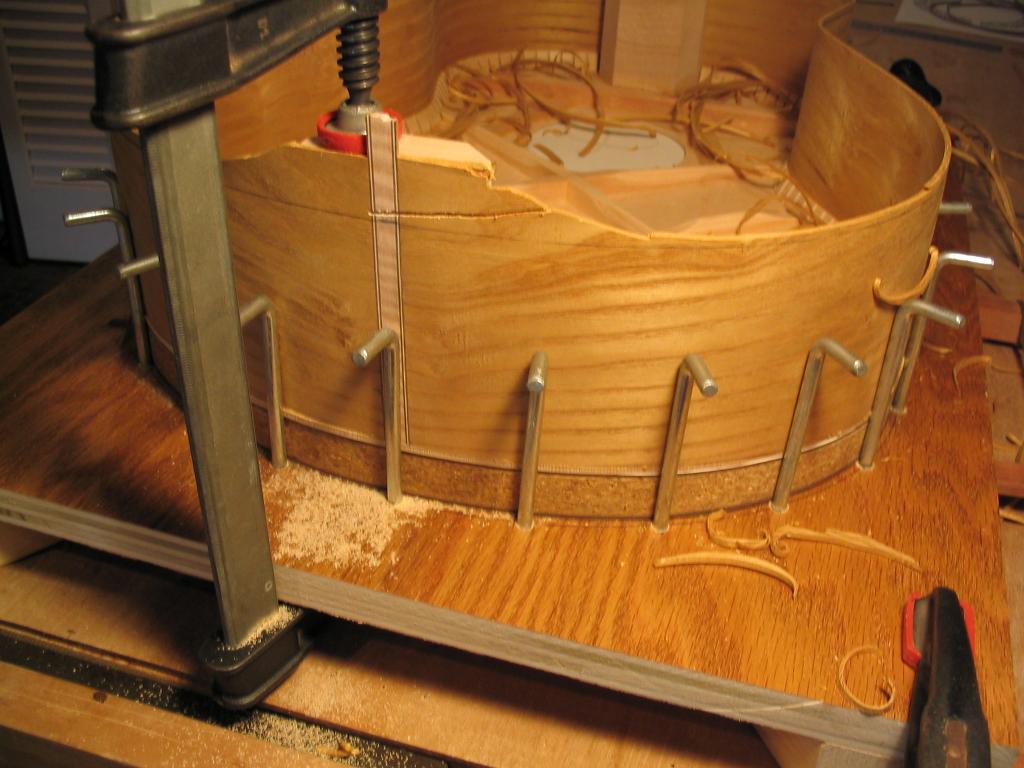 The tail block after sawing – ugly, but easier than trying to spokeshave all that material off. (Got kind of close to the line, though…) 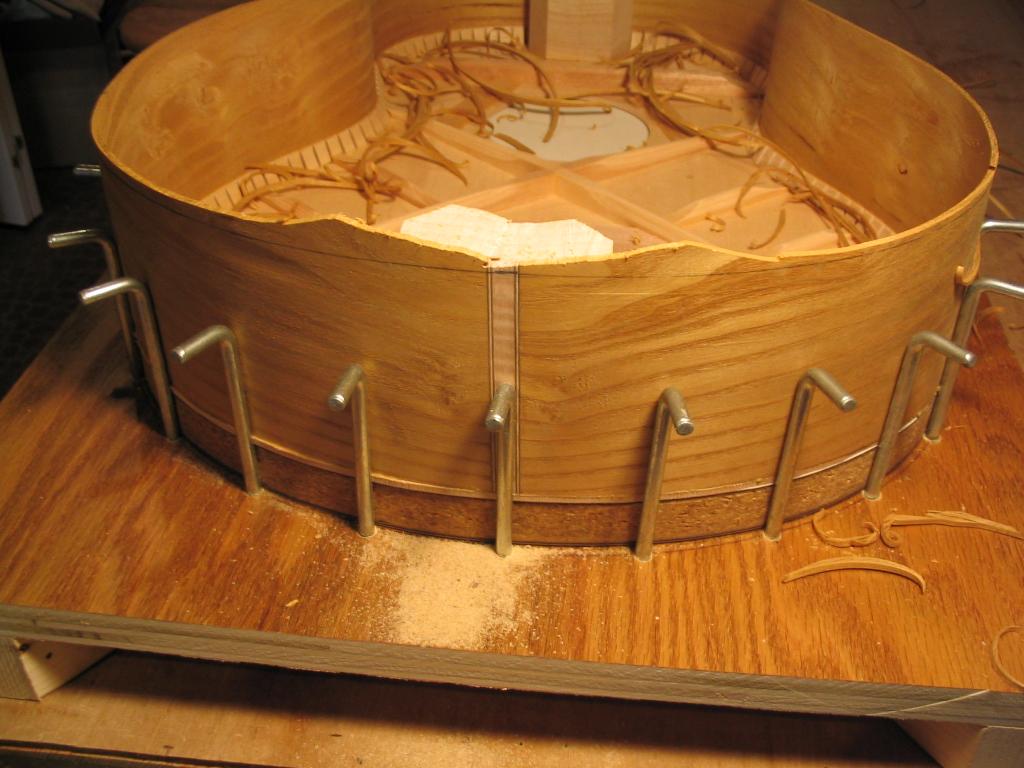 Shaping now proceeeds with a spokeshave. This allows fine shaving, to shape the side profile right to the line.

The end and neck blacks need to be tapered so they’ll match the arch of the back – they’re not horizontal on top, but arched slightly. A gauge cut with the longitudinal arch of the back is used to check the taper as they’re shaved.

Here’s a close-up of the taper being checked on the neck block.

When the side profile has been shaved to the reference line with the spokeshave, the profile should now match the arched profile of the back. This is checked by inverting the assembly on the arched workboard. The assembly should sit evenly on the board, with no gap showing at any point. If there are significant gaps, the assembly can be placed back in the jig and shaved further. Note that the fit is less critical than with the top, since the back is flexible and will conform to slight irregularities in the profile when it’s clamped during gluing.

Next, kerfing is glued along the edge of the sides as was done for the top joint, using clothespins reinforced with rubber bands to give them a little greater clamping power. Note that as before, the kerfing is glued on so that it sits a little above the edge of the sides, since it must be shaved to a taper that matches the arch of the back (as was done with the neck and end blocks). 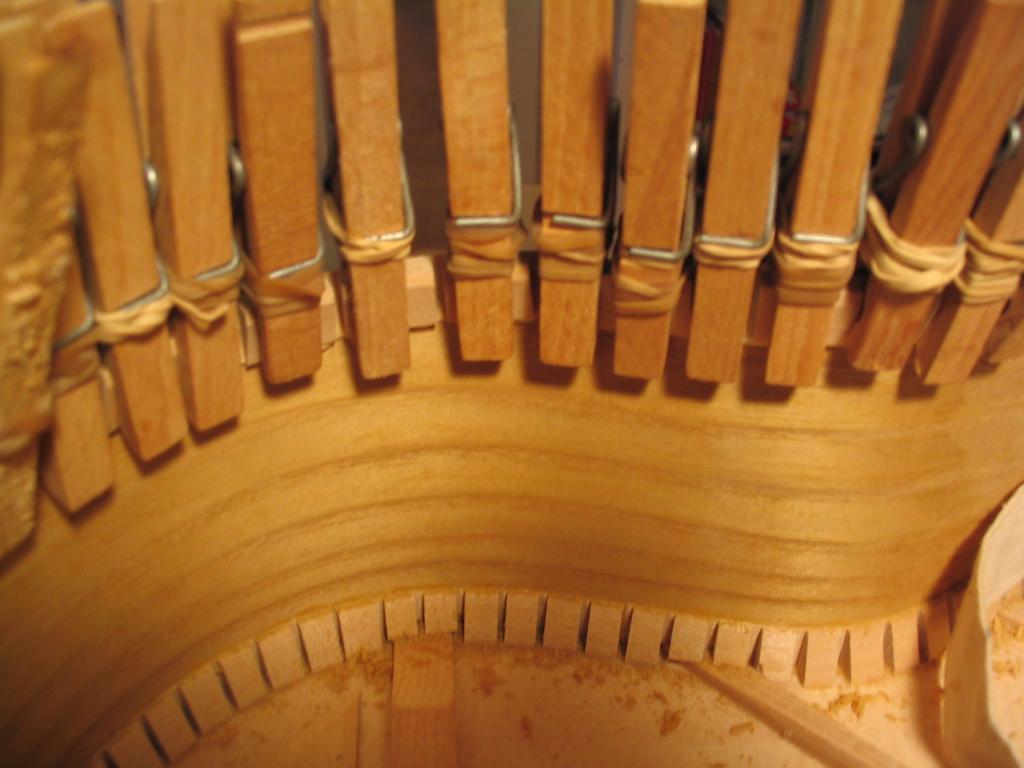 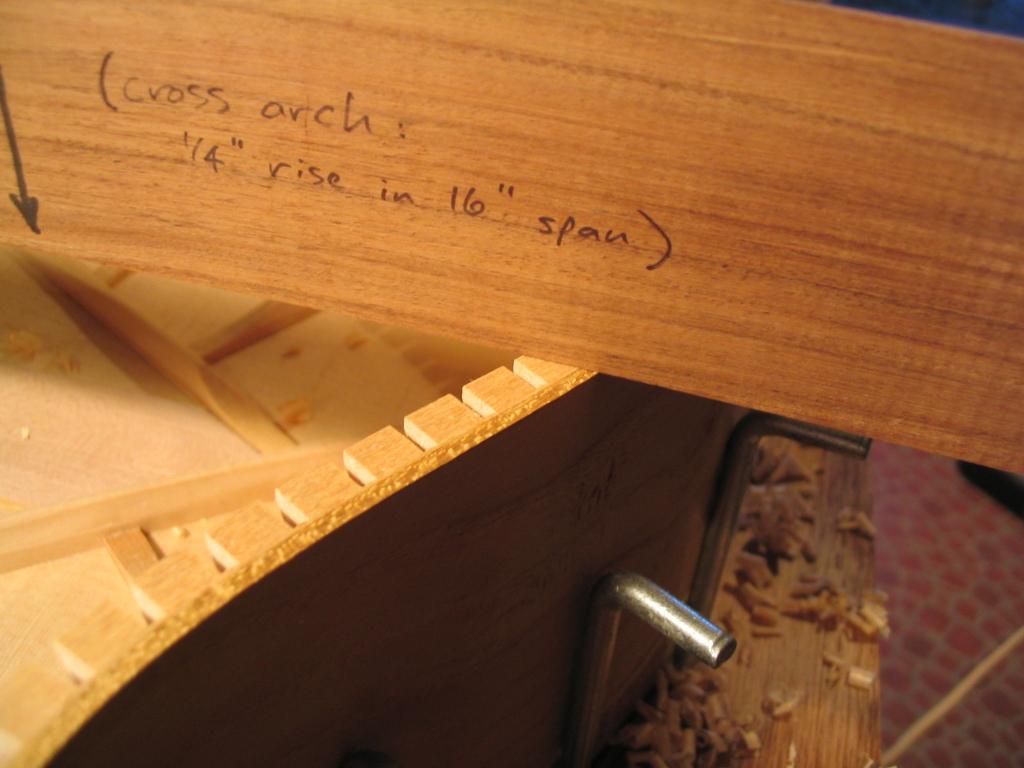 Next side reinforcement strips are glued on. These are thin and narrow strips of wood glued vertically at intervals along the inside surface of the sides. These serve to help prevent the sides from cracking due to an impact. You can just barely see the strip peeking out from beneath the clamps. The strip that is glued at the waist (shown) must have its gluing surface scraped to a concave profile so it will fit flush on the convex surface of the sides at the waist.

The neck block reinforcement can now be glued on. This is a block that fits against the neck block and top, and provides additional support for the portion of the top that will be supporting the fingerboard. Since the top is arched, the angle formed by the top and the neck block isn’t a right angle, and the block must be planed to the correct angle to contact both the top and neck block. The reinforcement block is the maple block below the cherry clamping cauls in the picture below.

The reinforcement block after gluing. 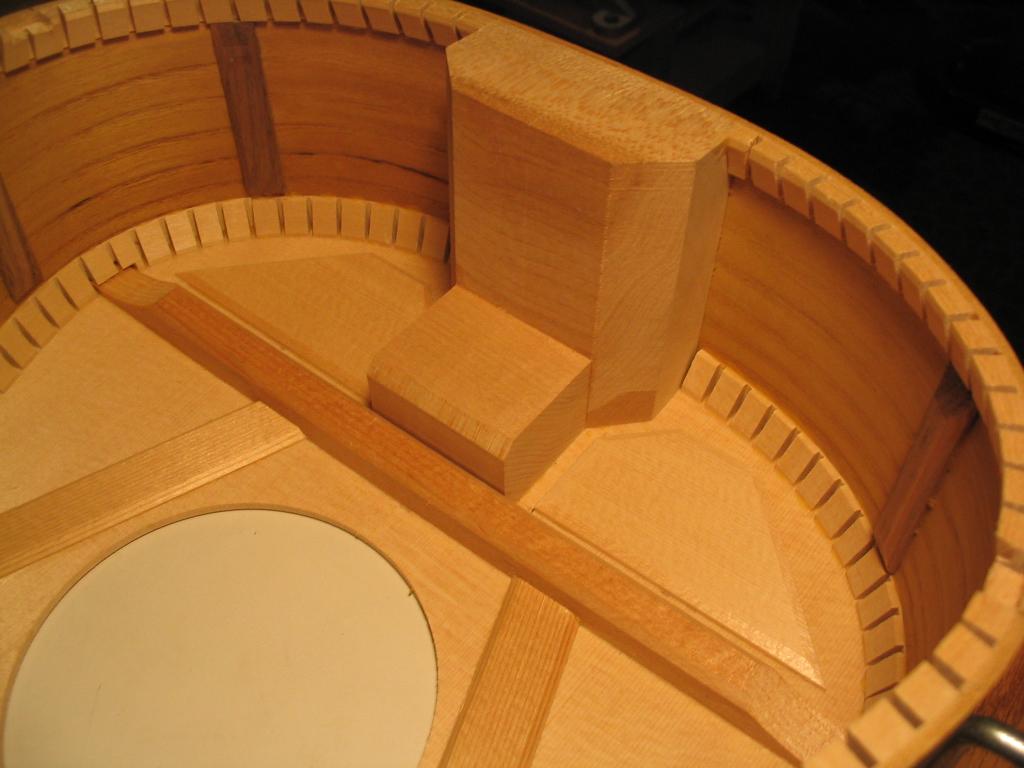 The kerfing must now be notched to accept the back braces where they meet the sides, as was done for the top braces. The back is placed on the side assembly, and the position of the braces is marked on the sides. 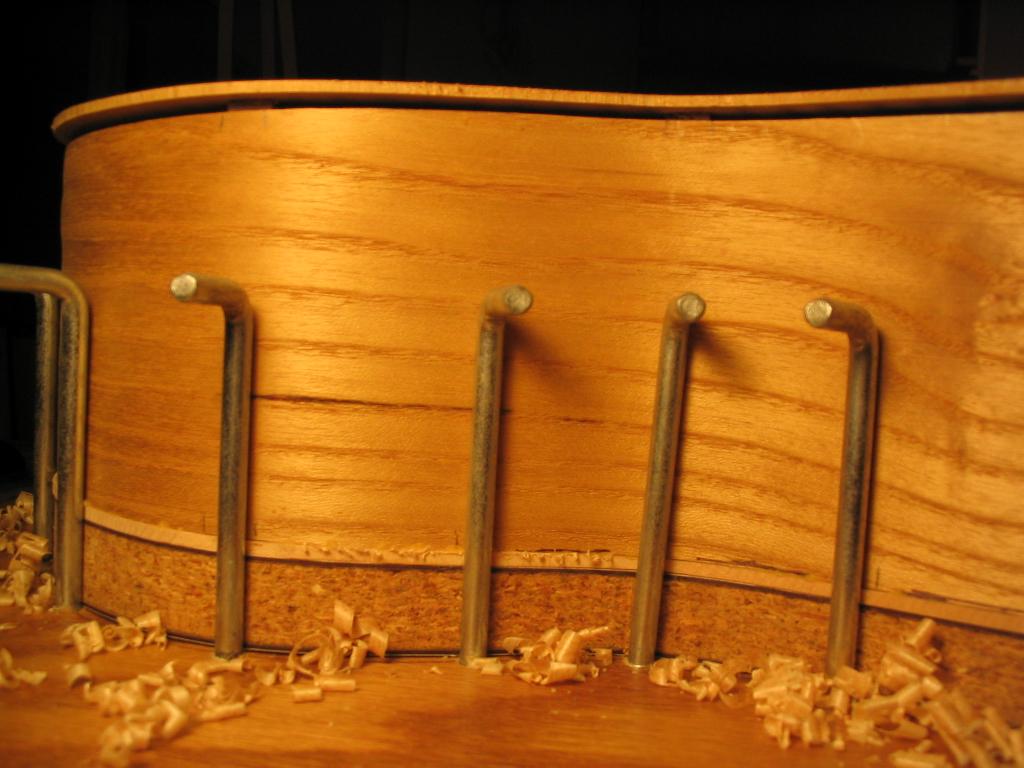 The brace positions are then transferred to the top surface of the kerfing. 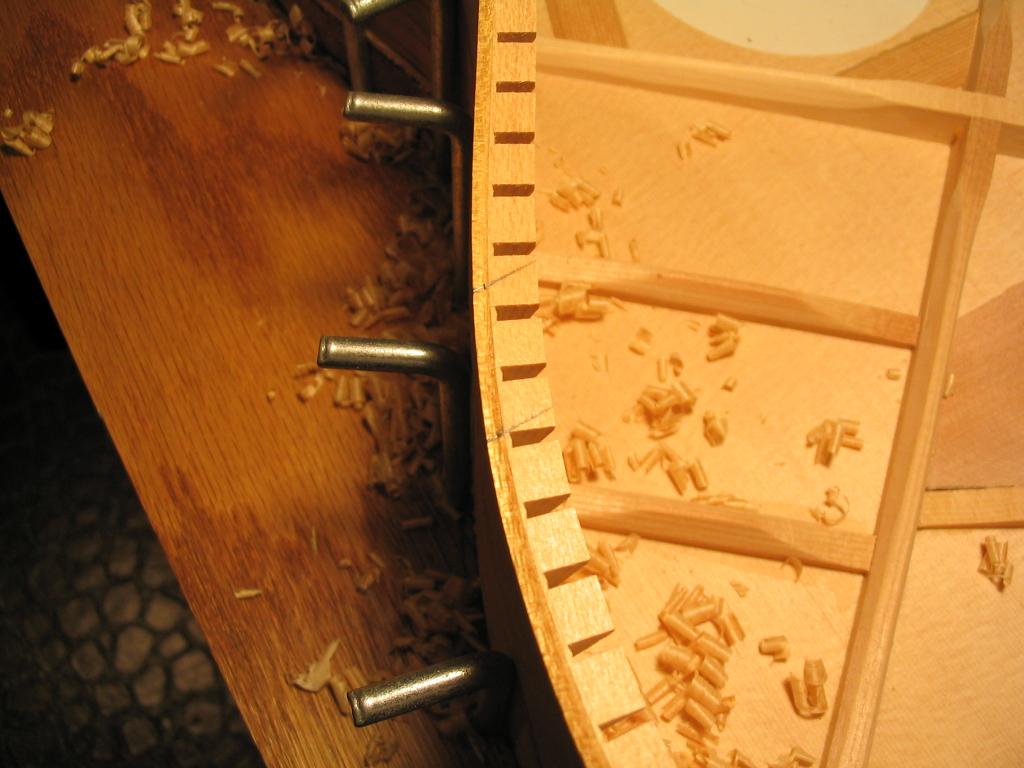 Just as for the top, the marked lines are cut with a knife, and the kerfing is then notched with a sharp chisel in the location of the braces. The depth of the notches is equal to the height of the braces where they meet the sides.

At this point, the back can be glued to the top-side assembly. Glue is spread evenly on the kerfing and end and neck blocks. The glue should be applied with care so that it doesn’t drip through the gaps in the kerfing. Glue should also be spread in the notches for the brace ends. 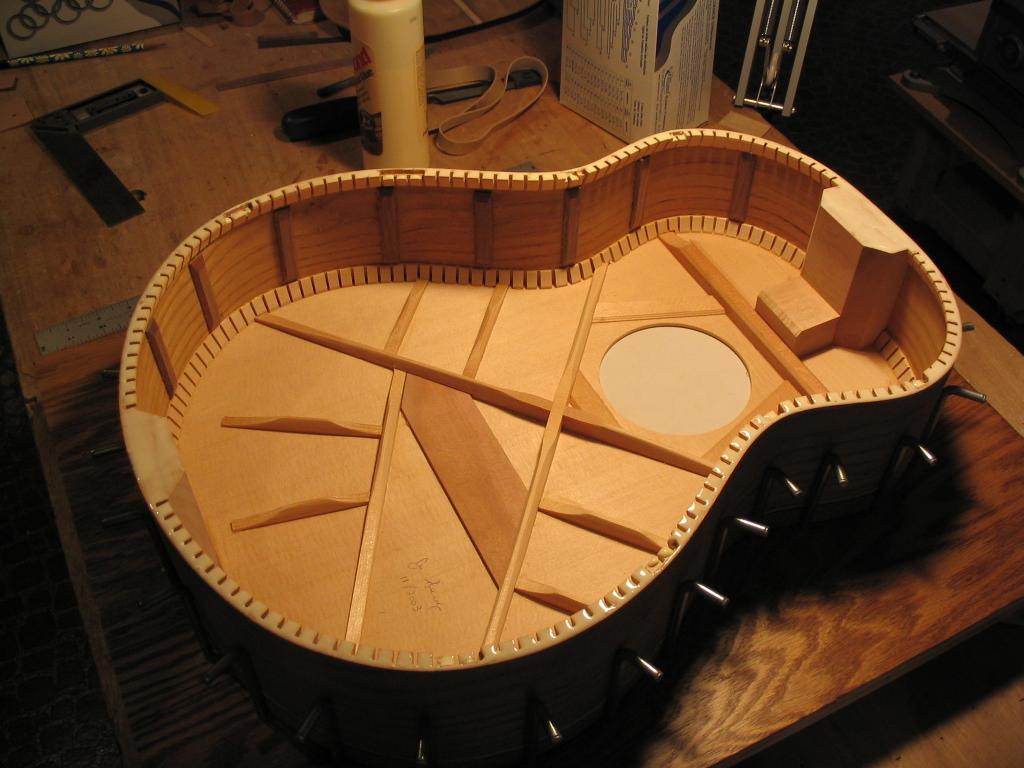 The back is then placed on the assembly, aligned so the binding strip in the back lines up with the binding strip at the tail. The number 107 rubber bans are then stretched between pairs of “L” hooks on the jig to apply clamping pressure. 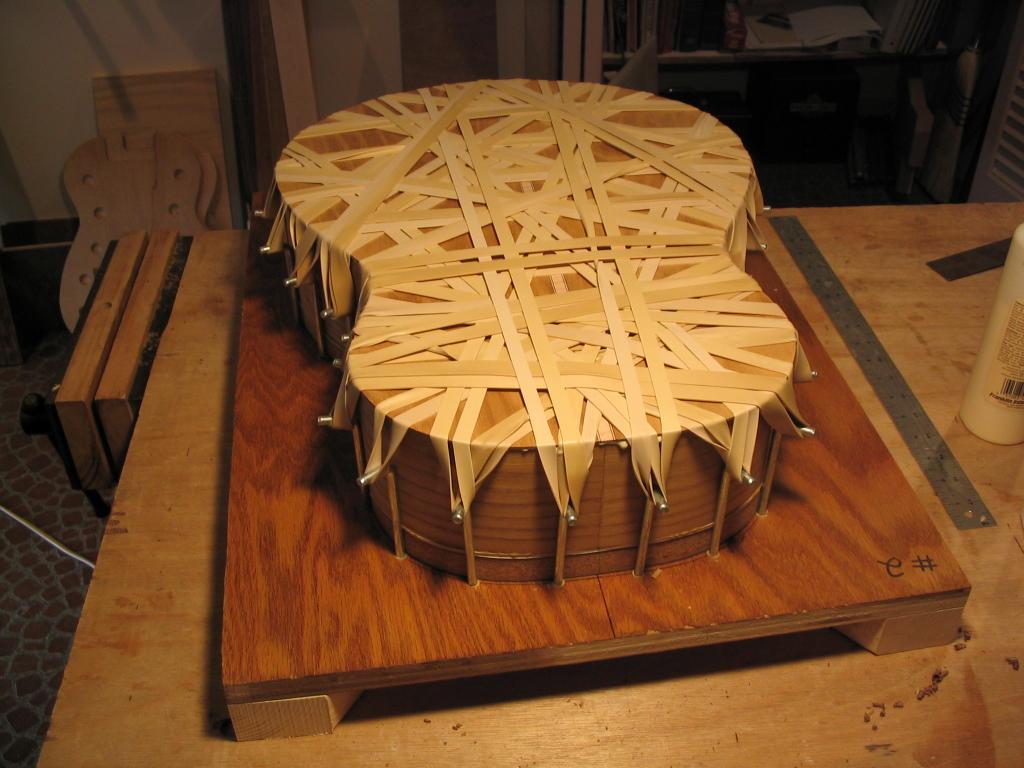