The woodwork of the guitar is now mostly finished (except for the bridge). At this point, the guitar is completed “in the white”, and needs to have a finish applied to protect the wood and enhance its appearance.

Many different finishes are used on guitars. The traditional finish, and one that’s still used on classical guitars, is called French polish. This is a finish that consists of layers of shellac that are successively applied with a “rubber”, which is a cloth “sponge” that lays down a thin coat of shellac and smooths any lines left in the application of the previous coat. A few drops of linseed oil are used to keep the pad from sticking as each new coat is applied. The finish builds slowly, and the final topcoat is leveled with very fine sandpaper (traditionally, pumice was used) and then rubbed to a high gloss. A well-done French polish has a glass-like appearance, with beautiful reflectivity and gloss. Unfortunately, the finish takes a long time to apply to build to the final thickness, and a lot of experience is required to obtain a good result. In addition, the finish is somewhat fragile – it’s very resistant to water, but easily damaged by contact with alcohol since that’s the solvent for shellac.

On steel-string acoustic guitars, the traditional finish has for some time been lacquer, specifically nitrocellulose lacquer. This is a fast-drying finish that gives a beautiful gloss. The finish is usually sprayed onto the guitar, since it dries so quickly that brushing leaves brush marks and lines where adjacent brush strokes overlap. Spraying requires appropriate equipment, but allows the finish to be applied quickly and evenly. However, one problem with spraying nitrocellulose lacquer is that its solvent is extremely flammable. The finish must be sprayed outdoors, or in a special explosion-proof spray booth. In addition, the evaporating solvents are essentially air pollutants, and large-scale users of such finishes (such as automotive and furniture manufacturers) have been required to reduce the amount of these volatile organic solvents they produce. This has led to the development of alternative finishes with reduced VOC (volatile organic content).

One recent and very promising set of finishes are water-based lacquers. These are very similar to solvent-based lacquers, but have been engineered as emulsions of tiny droplets of finish suspended in a water-based solution. When sprayed, the water evaporates, causing the droplets of finish to flatten against one another. The droplets contain just enough of the organic solvents to cause them to “melt” together to form the final film before the organic solvent evaporates. These finishes have a number of advantages – they are generally non-flammable and of lower toxicity than the solvent-based lacquers (though it’s important to always check the Material Safety Data Sheet (MSDS) for a finish to find out about its flammability and toxicity). The initial water-based lacquers tended to have some problems with appearance and film hardness; however, the latest finishes are equal to the solvent-based finishes, and superior in some ways (such as the ease of sanding between coats). However, one noticeable difference between water-based and solvent-based lacquers is the “depth” of the finish when applied to bare wood. Solvent-based lacquers, and French polish, tend to bring out the grain in the wood, seeming to give it a “glow” from below the surface. The water-based finishes don’t seem to penetrate the wood in the same way, and thus don’t give the wood quite the same sheen. To prepare for the application of the finish, the entire surface of the guitar is sanded with 150- and 220-grit sandpaper to remove any tool marks and uneveness in the surface.

Since the bridge must be glued to bare wood to ensure a good bond, the bridge location is masked before the finish is applied. The location of the saddle is marked on a piece of masking tape applied to the top, and the edges of the fretboard are extended to the tape and used to find the exact bridge centerline.

The bridge profile is printed on paper, and positioned on the masking tape. The outline is traced with an Xacto knife, leaving a tape mask in the exact profile of the bridge.

The fretboard is also masked on its top surface.

The soundhole is sealed to keep the finish out as it’s sprayed. I use a plastic coffee can lid with a block of soft foam or Nerf ball underneath to push the lid tight against the inside of the top.

Before the finish is applied, the pores of open-grained woods must be filled. This involves forcing a substance into the pores of the wood so the finish will sit on top of it rather than sinking into the pores and having a pitted appearance. Only woods with prominent pores need to be filled; this includes many of the woods used in lutherie, such as rosewood, mahogany, bubinga, and non-traditional woods such as oak, ash and walnut. In particular, spruce and maple do not need to be filled before finishing – their pores are very small and are filled by the finish itself. The guitar shown has back and sides of mulberry, which has large pores that need filling. The most natural appearance comes when a clear filler is used. There are a number of fillers commonly used, including cyanoacrylate glue (“crazy glue”), epoxy, and thickened nitrocellulose or acrylic lacquer. Whichever is used, it is applied to small areas of the back and sides and “squeegeed” off with a plastic scraper, leaving the filler in the pores while scraping it off of the surface.

When it has dried, the filler is then sanded to remove any material that is not in the pores of the wood. A coat of shellac is then brushed onto the guitar, as an undercoat for the water-based lacquer. As discussed above, this helps to give “depth” to the appearance of the finish. The shellac is brushed on, as its solvent, alcohol, is very flammable. The shellac should be applied in a room with good ventilation to ensure that the vapors from the evaporating alcohol don’t build to dangerous levels.

The appearance of the wood will change markedly (for the better!) as the shellac is applied. There will inevitably be some brush marks in the shellac finish. However, the finish can be sprayed over the brush marks, as subsequent sanding (described below) will even out the surface. Any drips and runs should be removed, however.

The first two coats of water-based lacquer can now be sprayed onto the guitar. I use a high-volume low-pressure (HVLP) spray system, which helps to minimize overspray. Because I spray only non-flammable water-based lacquers, the low-tech setup shown suffices to exhaust any overspray. This arrangement is not acceptable for spraying any solvent-based finish – these require either a dedicated explosion-proof spray booth, or they must be sprayed outdoors. In addition, even though most water-based finishes are relatively non-toxic, an approved mask must be worn to keep from inhaling the overspray; these finishes are “relatively” non-toxic, not completely non-toxic!

The spray application will leave a high-gloss finish, but one that likely has a somewhat rough surface, termed “orange peel” due to its similarity of the texture to the peel of an orange. The surface is leveled after the finish has been given a day to dry by sanding with fine-grit sandpaper – 320 or 400 grit – before the next coats of finish are applied. The sanding can be done either dry or wet, with water as the lubricant. Wet-sanding is generally done to keep the finish from clogging the sandpaper; however, the latest water-based finishes tend to dry-sand very well, with very little clogging (but producing a fair amount of dust). The finish is sanded until it has a uniformly dull appearance, indicating that all of the orange peel has been leveled flat. It’s important to be careful at the edge of the instrument, as it’s easy to sand through the finish; if this happens, the spot is touched up with shellac before the next finish coats are sprayed. In addition, any spots which need additional filling – pores which were incompletely filled, e.g. – will be apparent as glossy spots in the dull finish, and can be filled before the next coats are applied.

A close-up view of “orange peel”, before it is sanded flat.

When the finish has been sanded flat to remove all of the orange peel, the next coats of finish can be sprayed. The sand-and-spray cycle is repeated until the desired number of coats of finish have been applied. I try to keep the finish thin; too thick of a finish will dampen the sound of the instrument. With water-based lacquers, I usually apply 6 to 8 coats, two coats sprayed at a session, with sanding between each session. The final coats are sanded with successively finer grit sandpaper, up to 1200 grit; at this point, the finish is smooth and flat, but with a dull appearance from the sanding.

The finish is then buffed to return it to a high gloss. A buffing wheel is used, along with various polishing compounds. I use Meguiar’s automotive polishes; a wide variety is available, from those formulated to polish out the scratches left by the final sanding to those designed to bring the finish to a mirror gloss. I’ve found that just a few of the compounds are needed: #1 medium-cut cleaner to buff out the sanding scratches, #1 fine-cut cleaner to refine the gloss, and #3 glaze to produce a mirror finish.

A spray bottle of water is used as needed; buffing requires a bit of experience to know how much compound, water and pressure to apply. After the #1 compound has been used to buff out the scratches, the finish will look great; however, it’s after the #3 compound is used that the mirror finish appears.

All of the sanding between coats to level the finish really pays off in the final mirror gloss! 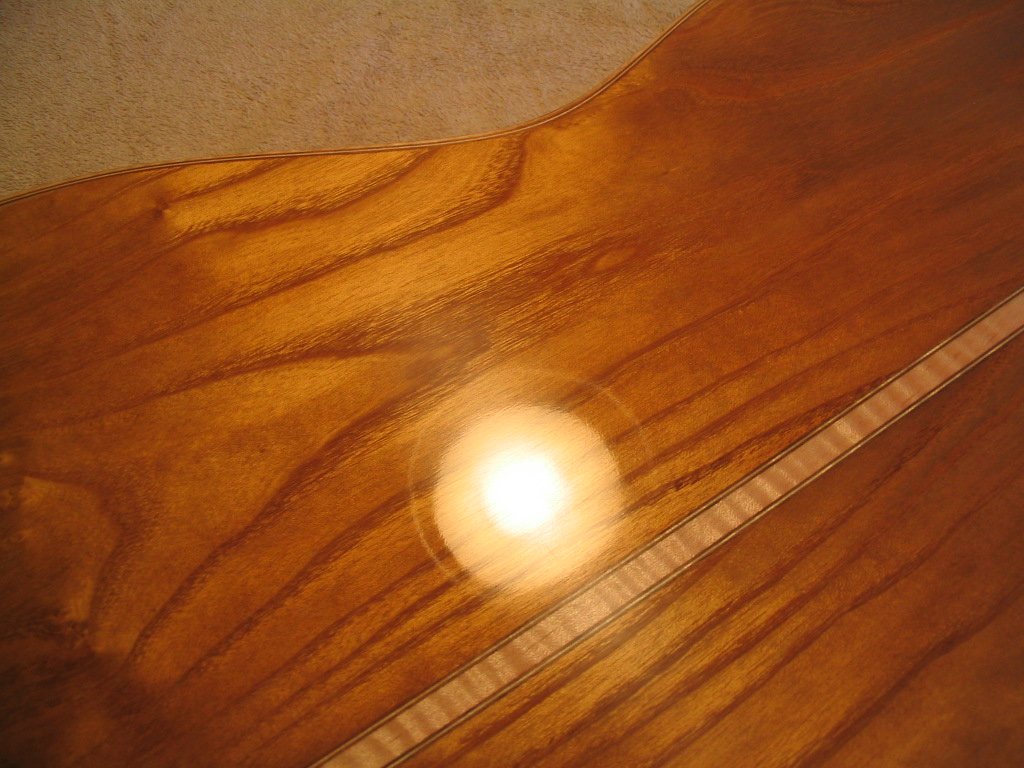